New Orleans, it’s gritty, friendly and the land of amazing music, art and good eating. My husband and I both have history in this town. Ric was born here and lived here for the first four years of his life. His grandfather who lived in the French Quarter in the 1960’s was an artist who captured the soul of the local people through his intricate paintings and drawings. My grandfather also lived in New Orleans where he owned a restaurant and inn where he served up Cajun and Creole fare back in the 1940’s.

I have childhood memories of spending time during the summers with my grandfather in New Orleans. Mostly I remember snapshot glimpses of lights, music and the carnival atmosphere. I also recall my grandfather telling me about people who picked-pockets down in the French Quarter and that I needed to always hold his hand so I wouldn’t get lost in the crowds. 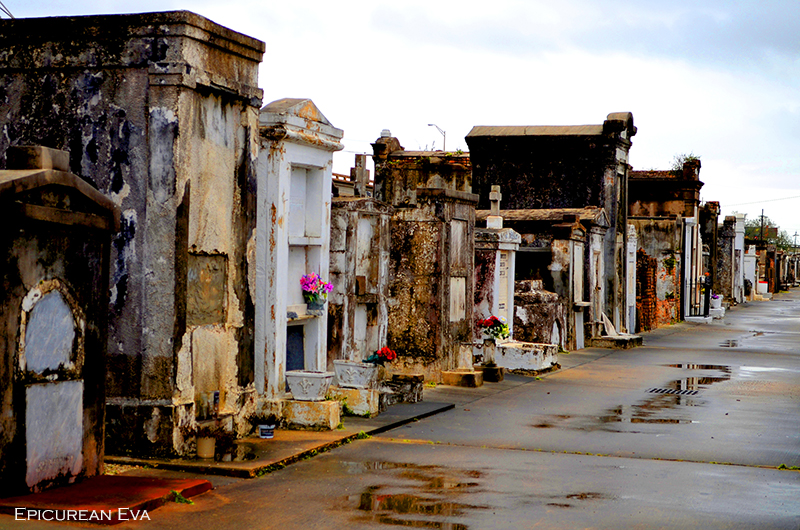 On this trip we arrived to murky skies letting loose torrential rains with claps of thunder and lightning but still, the smells, I don’t think any other city smells quite like New Orleans.

This is aromatherapy at its best with Creole spices, sautéing onions and peppers and the smell of butter and sugar cooking along with pecans in big copper pots wafting throughout the streets of French Quarter. Like a beautiful seductive temptress, sights and smells are calling you in all directions to taste and experience the flavors of generations in this melting pot of cultures.

It’s hard to explain what I feel in my heart when I come to New Orleans but it is similar to what I experience in San Antonio. Only here, I get to share the emotions with Ric who also feels the tug of long ago roots and the spirit of his grandfather who, like mine, still speaks to us at every street corner where they once stood. 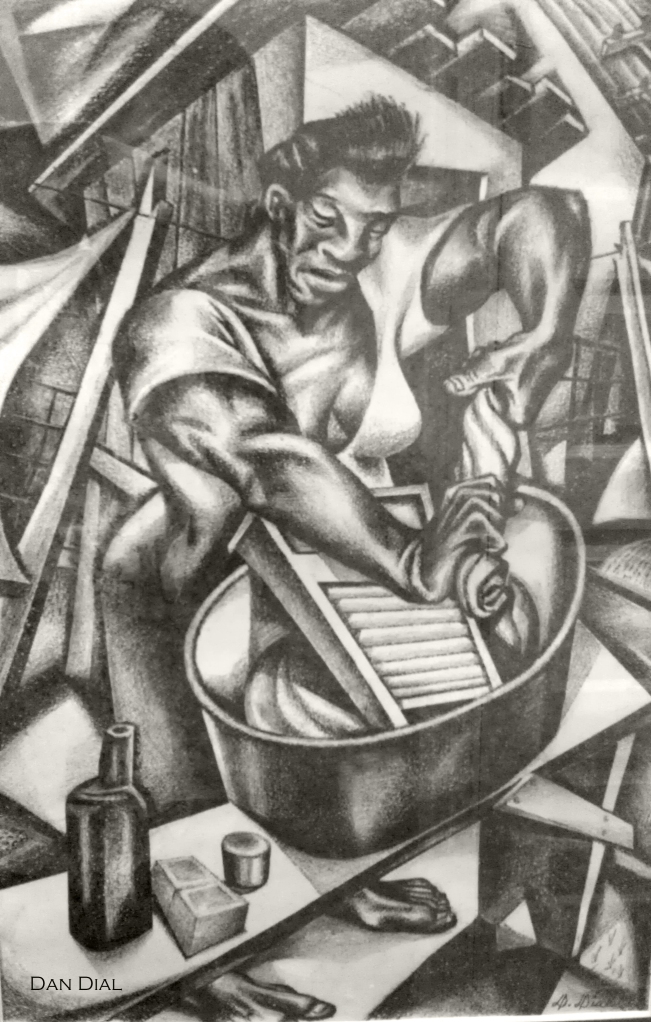 When I first saw some of Ric’s grandfather’s charcoal drawings, I was almost brought to tears. Dan Dial’s works embodied the faces and harsh life of the times. Most of his subject matter was that of the street life – worn ebony faces and powerful sinewy bodies of those who worked long and hard to make ends meet. You could see the pain and pride beheld in their downcast eyes.

Expression through music and art is woven through the fabric of everyday life here. This is a place of lost and found dreams where musicians tell their stories through an instrument of choice in clubs, on the streets and in the parks. Occasionally you will find a talent of such great depth that it stops you in your tracks as we did walking along Decatur Street. Sitting alone with his guitar we came across Stoney B Blues who serenaded us with his soulful songs. 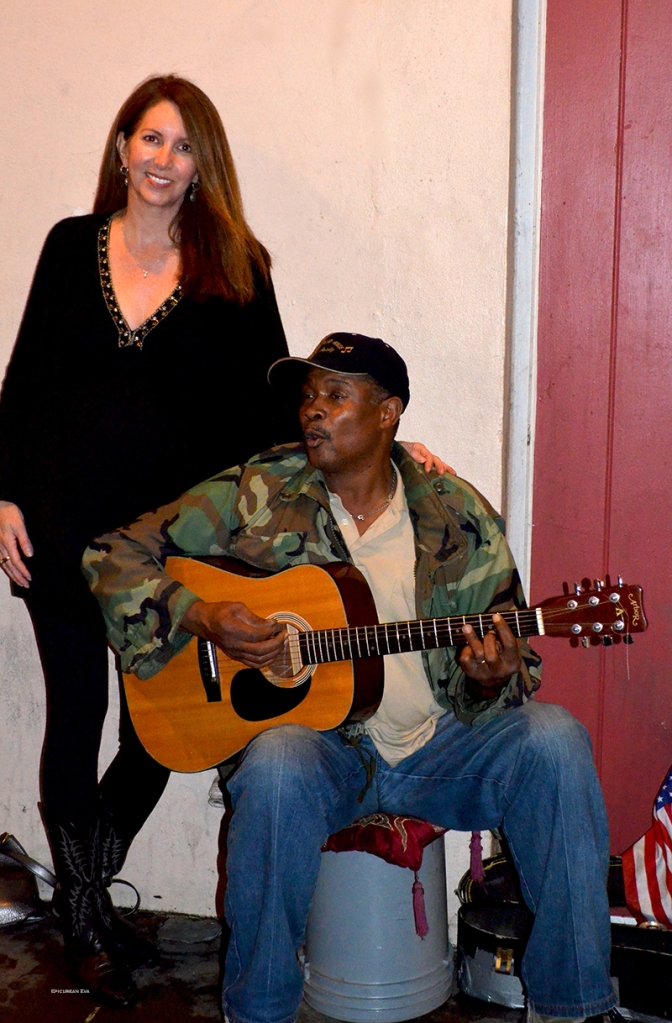 A successful musician and band leader in New Orleans and Southern California, he still comes to the streets to sing the blues. His voice is rare and sweet and we felt privileged to be graced by his gifts. This is the world of the humble who sings, paints, writes, cooks and creates, because he or she has no other choice, their passion is what drives them. 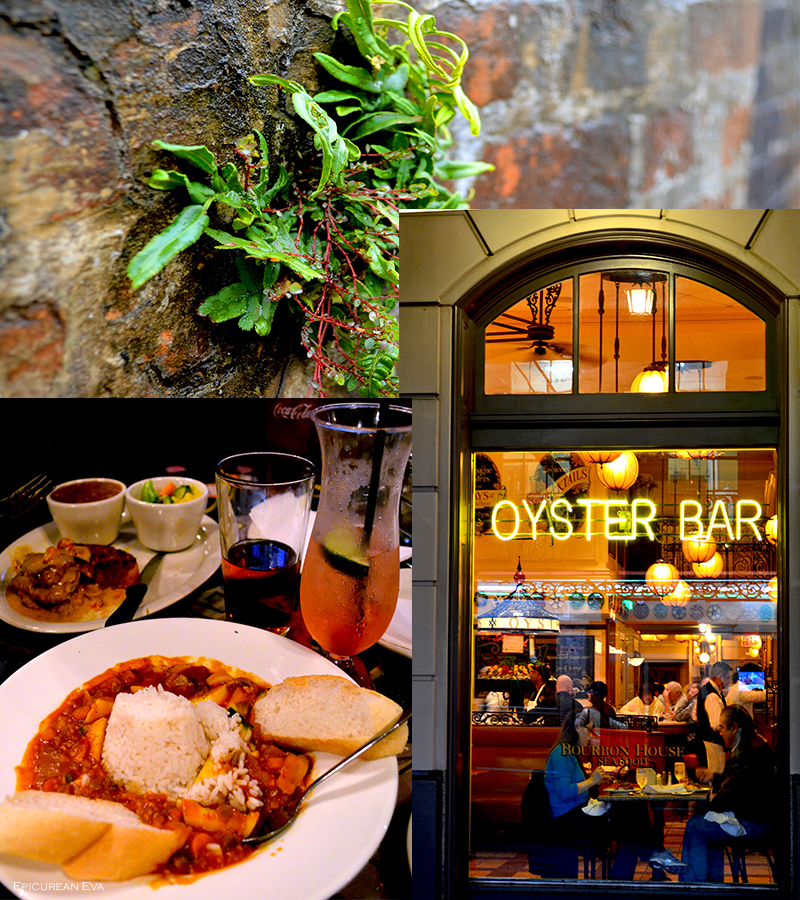 Dinner was fried eggplant, red beans and rice, a vegetarian Creole stew and creme brûlée at Oceana Grille and then a late evening walk around the spectacle that is the French Quarter at night.

We rounded a corner to find a tall, thin, and all but for what looked like a pink crocheted netting of a frock, a naked woman sitting on a bar stool at the entrance of an establishment, smiling and enticing tourists and revelers as they walked by. There was the overweight middle-aged man dragging on a cigarette dressed in a bedazzled bikini top and cut-offs with a platinum page-boy wig and cowboy hat to finish off the look. Live music was blasting out from clubs and bars, people on the street were selling everything from mardi gras beads to a photo opportunity with a local. It is commercial debauchery at its best but it is camp and fun too. The Big Easy is where you throw your diet out the window, join the celebration and dance in the streets. 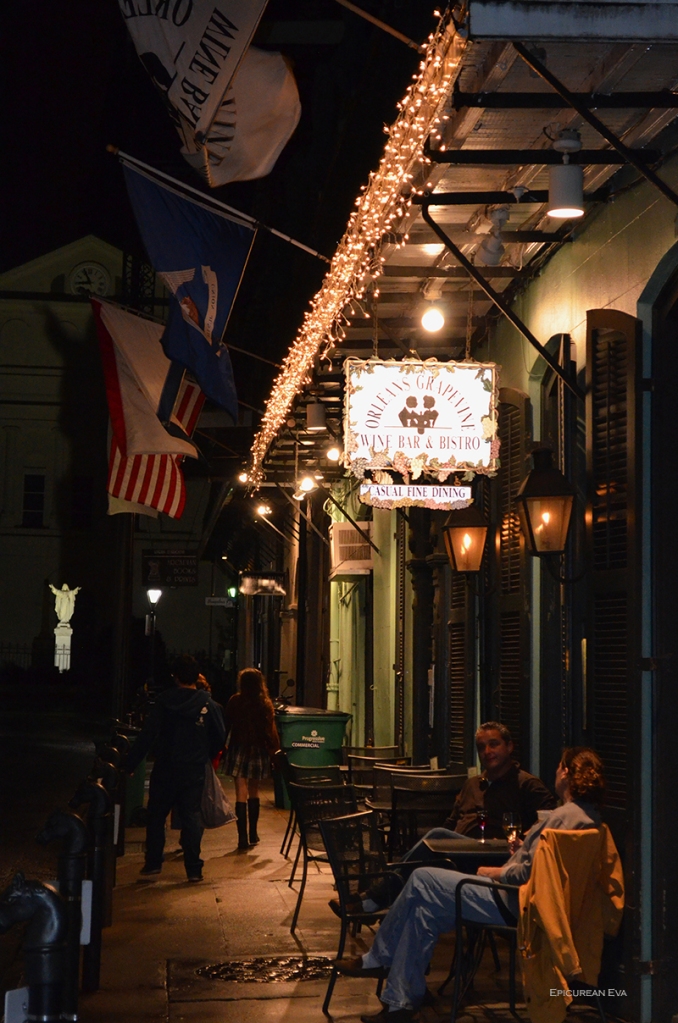 Take a turn off of the main streets of neon, bars and clubs and you will find some of the best restaurants in the country. Tucked away down dark streets are gorgeous little bistros and cafes that capture the flavor of the local cuisine that originated in Spain, France, Mexico and Africa.

A dish that we saw on a number of menus was called mozzarella fireballz or firecrackers. This is a wonderful spin on a caprese salad with a defined kick. The combination between the sweet tomatoes, cool lettuce and fiery hot mozzarella balls is delicious. 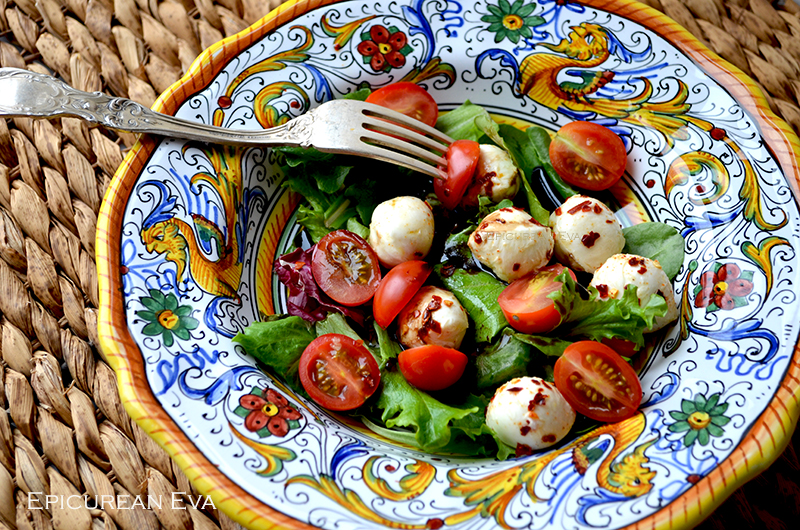 Mix the olive oil, pepper flakes, cayenne pepper, garlic and salt together in a bowl,

Drain the mozzarella balls on some paper towels to remove as much moisture as possible. Add the cheese to the oil and give them a toss to coat thoroughly. Chill in the refrigerator for at least 4 hours.

Remove cheese 30 minutes to an hour before serving to allow the oil to liquefy.

To serve, divide salad greens and tomatoes on 4-6 plates. Arrange the cheese on top of the greens and drizzle with some of the marinating oil and the Balsamic vinegar.

Please share your thoughts. I look forward to hearing from you! Cancel reply